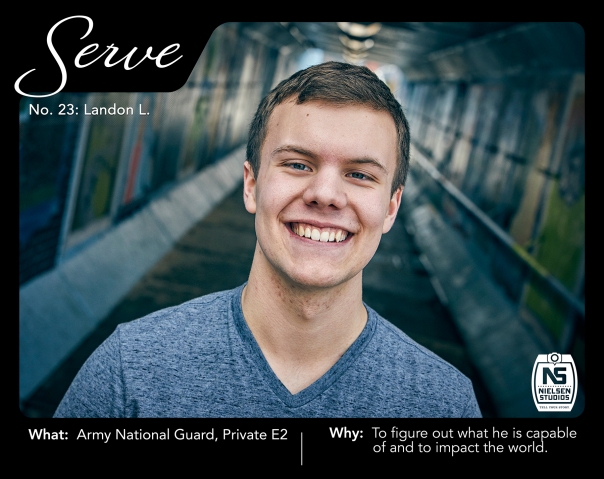 Serve #23 is about a young man named Landon. I’ve known Landon since he was an eight years old and now he’s the ripe old age of seventeen (almost 18). He was a regular cast member along with my daughter, of a local musical theater group, Front Porch Musical Theater. Landon always been a wonderfully polite young man with a chivalrous demeanor; qualities I don’t see often in today’s youth. My story isn’t about that though. It is about his decision to become a part of the Army National Guard, for which he currently holds the rank of Private E2. He is making this decision to prove to himself what he is made of as well as to have the opportunity to figure out how he is supposed to impact the world. Once Landon finishes basic training and additional educational requirements he desires to gain employment in the law enforcement field at the local level, transitioning to a higher government and/or intelligence level, continuing to serve throughout his life.

As we spoke he shared that he also wants to be a role model for others. If a seventeen year old musical theater student can join the army, so can they. He added that whether or not you are joining the ranks of the armed forces or not, there is not a valid excuse for not going after something. His words were, “You are what you allow yourself to be”. Landon also inserted one last encouragement by saying “People need to know that they must work hard for their future”.

Landon I salute your service and am very excited to see what he future holds for you.  May we all follow your lead!

I met Tracey Tischler just under a decade ago when I needed a makeup stylist for a high level executive photoshoot.  My original stylist who was booked backed out the day of the shoot with no warning.  Tracey stepped right into the role that morning like we had worked together for many years.  Needless to say I was impressed by her ability to mold into any situation, and talk to anyone no matter their status or job role.  She has a great rapport with nearly all of humanity (I think even if they spoke another language she would still make them feel comfortable).  I think what has brought me to write this “Serve” about Tracey is her ability to talk to anyone, better said her ability to be an encourager.  I have seen her encouragement played out as she gracefully applies makeup to a mother and daughter preparing them for a photoshoot.  The amazing part was watching Tracey apply her art to a little girl who was fighting a battle against Leukemia as well navigating life with the struggles of being a child with Down’s Syndrome.  Tracey gave time to the pair as well as loving words of encouragement.  To Tracey this mom and daughter were royalty, and it was her role, maybe even her honor to care for them.  Tracey much like all of us has a story that defines who she is, but that story does not hinder what she has to offer the world; ENCOURAGEMENT! 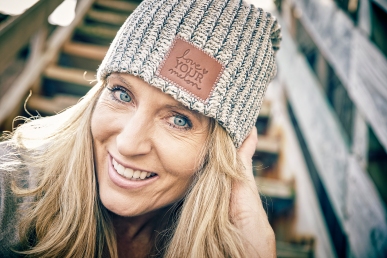 I think a lesson we can glean from Tracey is to be a person of encouragement to a world that desperately needs some.

Sometimes you just need to do a test on a set concept!