The subject of Serve #3 is the greatest man in my life.  He is Niel Nielsen, my dad.   I chose this wonderful man for a few different reasons.  The first was his 32 years of service in Law Enforcement.  He served on the City of Plymouth Police Department starting in 1965 as a policeman and retired in 1996 as an investigator.  He experienced scores of things in his years of service; from drunkards, to child abusers, to kids pulling pranks on neighbors lawns.  The job triggered a few ghosts over the years but that never stopped my dad from serving as a role model to me and my brother, and friend and husband to my mother.  My dad seemed larger than life to me…he was a cop, And I growing up I thought that was pretty cool. 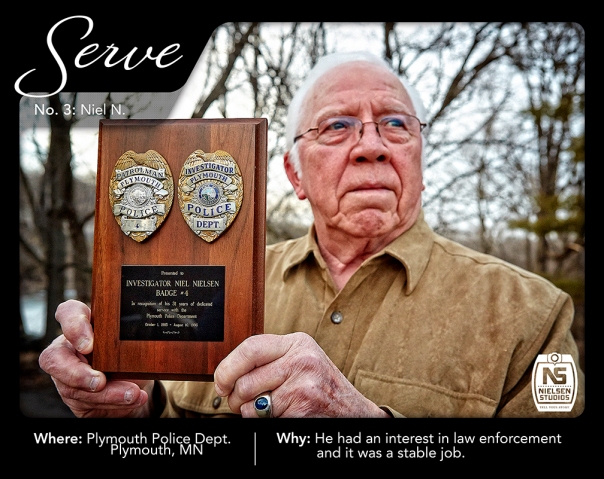 I tried to imagine the grandiose reasons why my dad chose law enforcement, like you would do when you’re a child, you know, like protecting us all from the bad guys, or flashing the badge to protect women and children. But, when I posed the question of “Why, dad, did you serve for that many years?” His answer wasn’t as glamorous as a typical kid might think. He simply said he had an interest in law enforcement, and that it was a stable job.  That stable job lasted 32 years.

But his “Serve” doesn’t end there. You see, he never stopped serving.  The next handful of years were filled with weekly visits to my grandmother in Minneapolis who he likes to say was his second mom until her death in the winter of 2000.  His “Serve” doesn’t end there either. Through the years of my mom’s battle with pancreatic cancer, He unselfishly stood strong in the storm that cancer often brings as he went to countless doctor appointments, chemotherapy treatments, and stood unwavering by her side until my mom’s battle ended in August of 2004.

So, when I look at what the definition of “Serve” is I look at my dad. He is a man who cares deeply for people with faithfulness and a smile.

Live for the Tomorrows!

A big thank you to Amy Wells for proofreading and editing this for me.

I knew this opportunity was going to be #2 in my “Serve” series. 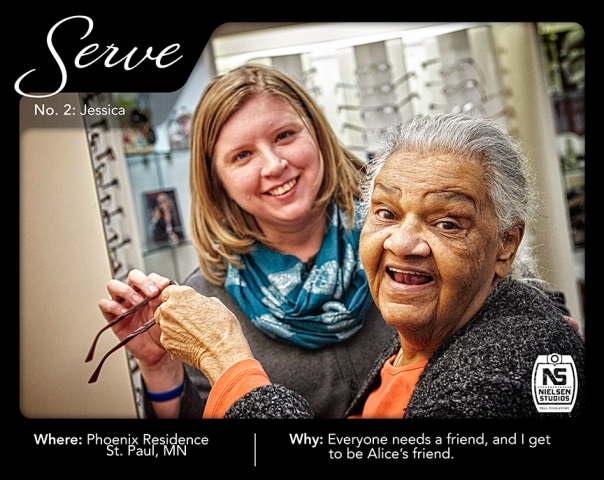 When Jessica (who works for the Phoenix Residence) said the words, “Everyone needs a friend.” and added, “I get to be Alice’s friend.” I was deeply moved.  Humanity is still good.  Sure we hear bad stuff from the media, but that is a mere slice of life out there.  I think we need to look at the whole of humanity and realize right in our backyards are people reaching out and making a difference in peoples lives.  People with the desire to “Serve”.

In closing, I put Jessica in the background a little bit, even slightly out of focus.  I did this to bring into focus the one who is being served, because she is the focus of Jessica’s “Serve”

Live for the Tomorrows!